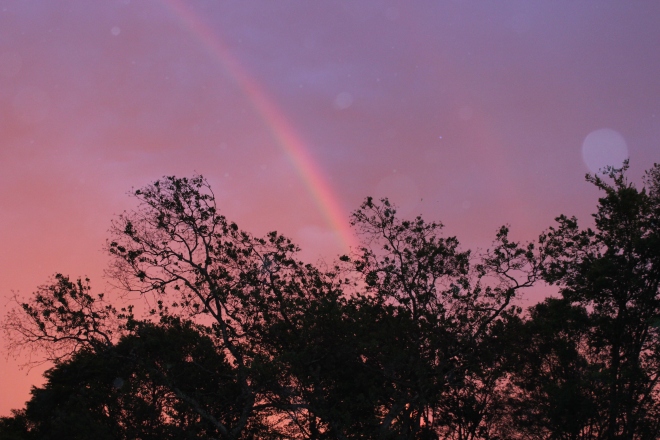 These last two weeks pushed hard. Friday before last, as I settled in for one of those naps you take when you are early into having a bad cold—desperately needed and also not enough—I heard my email ping. It was a brief note from my dad about the rough night he’d had and his sense that he might have a bladder infection. My first impulse was to burrow even deeper into bed, respond to him with the suggestion that he take Motrin and let me know how he was feeling in the morning. Instead, I burst out of bed, threw on some clothes and got to his casita quickly, all business, to inform him we were going to the urgent care place in Prattville. Those of you who are my friends on FB know he was actually extraordinarily sick with severe sepsis. Had I followed my first impulse, my dad would more than likely have died. It’s still discomfiting to remember how each doctor that saw him over the course of his hospital stay underscored just how sick he had been.

Along with tending to Dad, there was a cold to get through, a house to get ready for a friend of his who’d been planning for months to come see him, other pieces to put in place since, the day George was leaving, Maria would arrive and two days later, my brother Hans from Holland. I was stretched out on the sofa in Dad’s room on Sunday when I got a text from a parishioner who recently moved out of state. I had gotten to spend time with her sister who had been through a series of tragedies that would devastate anyone. Now, she had had a very serious stroke and was in the ER by herself because all her family was out of town. I made sure my dad was resting comfortably and headed down to see her. Her situation was almost too much to take in.

Over the next few days I visited with her whenever I was in the hospital with Dad, received George, schlepped him back and forth between the hospital and home. He was so incredibly gracious and generous, helping to tend to my dad while I got to put in a couple of days work. George was a staff photographer with National Geographic until he retired and as we drove in and out of town, he told the most marvelous stories. This time, I had to ask for some help; several members of the parish I serve were extraordinarily gracious, preparing dinners for my family that were delectable, and gave me breathing room as George left and my peeps made their way here. I could be with them and not worry about cleaning up the kitchen.  I could steal a little smooch or hug here or there from the Spouseman, and could sleep enough to shake off the cold.

On Tuesday, Maria went to the church with me and had an absolutely glorious day with one of the true saints of Ascension. We got back way late that evening and sat down to eat our dinner. Hans, Dad, and Sherod, all joined us around the dining room table and Maria told them about her adventures that day (that included singing and dancing in the foyer of the office area of the church). She seemed to get more and more reflective as she spoke and the next thing we knew, she was telling Hans about the arc of her life, unsparing in her description of the ways in which she had been out of control, destructive and hurtful many times as she was growing up. There was regret in the story, and also glimpses of her indomitable spirit, that has never quit trying. After speaking so honestly about the earlier part of her life, she continued on to say, “Now, I am almost 21 and I am going to be an adult and I am working not to loose control, and learn to fold clothes, and cook, and use the microwave, and make the bed, and be responsible, and get a job, so I can have a good life.” For quite a while, she talked about the future she now dreams of for herself. The rest of us were spellbound. Every chance we got, Sherod and I snuck looks at each other. In astonishment. In more gratitude than I can express. We surreptitiously wiped tears off our faces. This daughter of ours is an absolute miracle.

Morning came very early yesterday, and after tight hugs and re-hugs with each other, Maria and I did what we always do now, when it is time for her to leave. First I made the sign of the cross on her forehead: “I bless you in the name of the Father, and of the Son, and of the Holy Spirit” and then she marked my forehead and solemnly repeated the words of blessing, before getting in her daddy’s truck to go to Atlanta.

I have taken this afternoon off, walking out in my garden before the rain came, sitting and watching the weather turn: first it was soft rain that got progressively steadier and louder on our metal roof. My brother and Spouseman went off to a community gathering and I just settled a little further into my chair, thankful my introvert self is able to have some time alone. The wind picked up to gusts of 30-40 mph according to my weather app.

When the squall line had moved through, just as the sun was setting, the sky lit up with incredibly beautiful colors, and in the midst of all those soft pastels, I saw as fierce a rainbow as I’ve ever seen, the colors so true, the boundaries between them so much starker than usual. It was as fierce as the relief of ending a week knowing my dad is on the mend. My daughter continues on her journey, going deeper and further and with more courage than most people I know. I love my brother and his awful sense of humor and I love the way my husband’s face no longer looks haggard or worn out, how much more frequently he flashes those smiles that melt my heart. Promises made. Promises kept. A reminder painted bold in the sky, of Steadfastness, even as the wind was howling all around me. 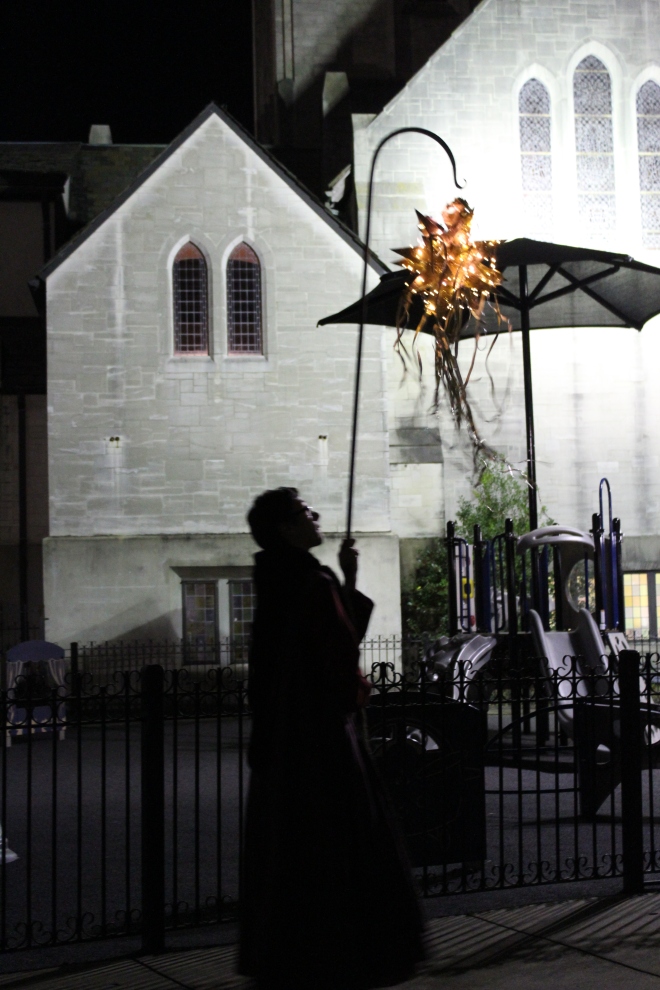 On Sunday evening, two friends and I were cleaning up in the kitchen after dinner. The spouseman and a couple of other friends were sitting around our dining room table, laughing and talking. I was struck by a thought that, to some, might seem morbid but was as filled with wonder and gratitude as I could ever imagine. To give it a bit more context and meaning, I need to harken back to conversations Sherod and I have had in the past.

One of the questions for people like us, who got used to living in border spaces, has been “where will we be buried when we die”? That, in some ways, points at what we define as home and for the longest time, we had no answer. We’d come to spend a holiday in Selma and I’d marvel at family plots with generations and generations of a single family buried together. Generations being born, living and dying in one place is far, far removed from the realities of my family, where each generation for at least the last four, has literally moved to a different continent than where the previous generation lived. In my generation, my older brother will likely be buried in Holland and my younger brother in the U.K. I still wish there could have been a place that marked my mother’s life, a place where I could see her name and get as close to her as is possible when all you do is use your finger to gently follow the letters of a name on a little plaque or tombstone. Her ashes went swiftly and playfully down to the Pacific Ocean after we sent them on their way in the Rio Caldera and the most I can do is gaze at a picture my younger brother took as he left Panama after her death, a picture that shows where the Caldera empties out into the Pacific.

On any given day, I would have answered differently if asked where Sherod and I would want to be buried or have our ashes buried or scattered. I was OK with that—after all, it reflected how lightly we held to place as a definition of home.   Now, there is much less doubt and in fact, sometime soon I have to make some arrangements because we know where our final resting place will be. We’ve even talked about filing funeral plans at Ascension.

I hadn’t realized until Sunday evening that there was a corollary to the sense of rootless-ness that defined most of our life together. With a husband 14 years older than I am, it is fairly reasonable to consider the possibility that I will outlive Sherod. I have never given much thought to what it would be like in the wake of his death, if in fact, I do outlive him. What came rushing in, uninvited and unexpected, as I stood laughing with my friends, as I looked around my kitchen, was a certainty that I’d be OK. I’d be able to find my way through that particular devastation. There would be people to walk with me, there would be other parts of my life that would demand my attention, that this small farm, and all the new responsibilities I would have to shoulder, would provide comfort and consolation.

In Fort Lauderdale, with the partnership in ministry Sherod and I developed, if something happened to him, it happened to me as well, when it came to my work situation. Even if I could continue working in the ministries we were involved in, I would not be able to earn enough to hold on to our house and the life we had built together. I am so liberated by having found and been found by Ascension on my own merits and on my own, by the fact that our vocational paths have broken away from each other definitively. I am my own person in ways I don’t think any woman before me in my family has ever experienced. I am also part of a community that I belong to and belongs to me. If it is true that I dread losing Sherod and even pray that it will be I who go first, I am so incredibly thankful that I can bear to consider such a possibility.

And really, such thoughts are grounded in something even deeper and more new to me. I have never had more of a sense of belonging, never been less lonely, than I am now. That is quite simply stunning. AMDG