I’ve been living in Floriday for 16 years now and I still am astonished when I realize that means I live in a hurricane zone.  I am sitting at my kitchen table looking out at palm trees still bending in strong breezes, remnants of Isaac.  It could have been much worse and still may do a lot of damage in a couple of days.  But as Isaac came through yesterday, it was tame enough to allow me to see and hear and feel it in a way you can’t when it’s a hurricane and you are shuttered in, and usually have lost power, and only hear the whistle and moan of the wind rushing around your house.  When Wilma came through in 2005, the enormity and danger it represented was literally brought home to me when the sliding glass doors that we had in the back of our house began to buckle in and our ears popped.  A bit more and we’d have had to be running for our lives.

So here are a few images of Isaac:

At about 6:30 yesterday morning, Sherod and I decided to go out for breakfast.  It was rainy and wet but you could see where the clouds ended against the horizon.

The wind was really blowing and the horizon had pretty much disappeared.

Later in the morning, around 9, another much more intense band came through–when that happens, you can barely see through the rain.

When I took this picture the rain was coming in sideways.  The band came through quickly and then it was time for me to go to church.  By policy, NRRM’s ministries are closed if there is a Tropical Storm or Hurricane warning in effect for Broward County.  But there’s something that goes against the grain about just not having church on Sunday so I decided I’d go and if folks showed up, we’d have the service.

On my way there, I came across a group of ibis feeding along the side of the street.  These birds amuse me no end and I know my friend Robin likes them too so I stopped to take a snapshot.  If you look closely (and I’m sorry, the quality of the photograph isn’t great), you can see what the wind is doing to the white ibis at the far right.  Gave a whole new meaning to the concept of “ruffled feathers”… 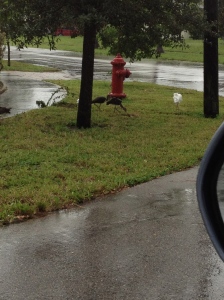 I didn’t believe anyone would show up for church. And 20 did.  The service was unexpectedly sweet. After a rough week, balm for the spirit.. 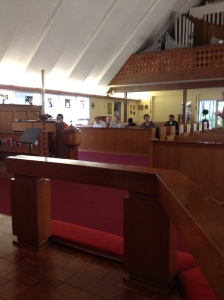 Ian and Sarah are happy, active children who struggle to sit quietly in church.  We found out yesterday that they are also great at helping take up the collection.  It made my day to see two little kids look so happy to be a part of things in church.

The wind huffed and it puffed and it blew all night long. A couple of times during the night I woke up because the power had gone out and was coming back.  Once there was some lightning. This was what it had looked like yesterday afternoon and I think it got quite a bit worse before it started getting better. 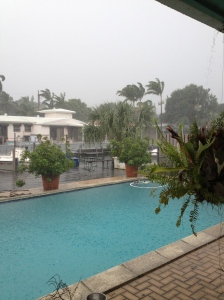 This morning, it is still windy, there are some reminders of the storm and I know it is far from over for the Gulf Coast.

But it’s pretty much over here; all we have left to do is keep an eye on the next two tropical depressions that are forming out on the Atlantic and to pray for the Gulf Coast.  That’s life in the tropics…

One thought on “Isaac”