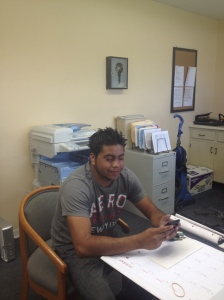 On Wednesday morning, I got to sit at my desk with a delicious baby boy, Aarón, on my lap while his mama took care of some business with Diana, our family programs coordinator.  Before too long I had figured out a way to get peals of laughter out of him—it is an intoxicating sound, that.  We usually have our girl over to visit on Wednesdays and this week was no exception. After a late afternoon appointment, Maria and I sat side by side and I told her about my visit with the baby and that led to her asking about about another Aarón, one of the first people who started attending Mass at el Centro on a regular basis when we opened the first storefront chapel.

I’d met him down at Vila’s, where day laborers gather to wait for work.  Somehow, he decided to come and see and then kept coming. An extraordinarily quiet young man, he has graced us with his presence. But as with most undocumented people, he comes in and out of our community life and there are times we can’t track him down and my heart goes to my mouth; I wonder if the Migra got him, or something worse happened.  We hadn’t seen Aarón for several months.  Yesterday afternoon, I was in my office when I heard his voice in the front office.  I went out right away and gently kidded him about the fact that I thought he might have been deported.  He hasn’t.  But he had come to tell us that he’d decided to return to Toluca, the city he’s from in Mexico.  That he was leaving early this morning.  Could we help him print his boarding pass, and could we tell him what American Airlines allows with baggage?

Over the years, El Centro has been the closest thing to a safety net he’s had and I was fiercely glad we could help him close out his time in this country in these two small ways.  We talked a little bit more and then we said goodbye because I had somewhere else to be; his eyes filled with tears as we hugged and I made the sign of the cross on his forehead.  There were twenty children about to arrive for our aftercare program so I drew myself up and went on to take care of business.  As the workday was ending, when everyone else was gone and the office was quiet, I sat and wept.

I see the line clearly drawn between who I was before my mom’s death, and who I am now.  One change in me has to do with these kinds of moments.  There had been plenty of goodbyes before June 5, 2011.  When I look back, I realize that more often than not, my response was a combination of grief and despair.  These days there is less despair.  Paradoxically, it makes the grief sharper.  The loss is more real and the things I used to do to defend myself from the intensity of the pain no longer work particularly well.

As I thought about all that, I remembered the 23rd of December of 1983. That night, I was the chaplain on duty at Southern Baptist Hospital in New Orleans, which meant that I had to respond to any emergencies, Code Blues (cardiac arrests) or any other pastoral needs that came up afer the three other chaplain interns had gone home for the night.  On the following morning, the 24th, I was flying to Cali to spend Christmas with my family.  In September of that year, my mom had been diagnosed with breast cancer and had had a mastectomy at Tulane Medical Center.  I was still defining boundaries with my family in some fairly tumultuous terms and I was very apprehensive about going home.

On my watch that night, seven people died. It seemed like my beeper never stopped going off, sometimes in the middle of my efforts to pray with people who were in deep shock and horror. One of the men died very unexpectedly and was still on the bed in the emergency room when his brother came in.  They were identical twins and imagine what it was like for that man in his early forties. I had just had my 24th Birthday and had no clue how to minister to him.  There is still a lot of haze and jumble when I think back on those hours.  What I remember very clearly is standing in the nurses break room in the oncology unit, as dawn was breaking, with one of my favorite nurses, Katie.  There were all kinds of Christmas goodies on the table and she looked at me and said, “after so much death you either have to have a great meal or great sex”.  There were some ways in which I thought I understood what she was saying and others in which I was clueless and would be for a while longer.  What I knew for sure was that I was numb.  In fact, I could only be home in Cali for 5 days because of my job, and I slept for the first 2 of those days.

As I understand it now, what Katie was saying was pretty simple.  We have to reclaim life and we have to reclaim it in the way we were created—in all our messy, wonderful, amusing and complicated incarnation.  Certainly sex and a great meal are both ways of saying yes, of receiving life back into those places that have been gutted out by pain and loss.  There are other ways too.  Yesterday, I went out to walk earlier than usual and took a different route.   I park my car at a Walgreen’s next to something called the 17th Street Causeway—a bridge over the Intercoastal Waterway.  I then continue along the beach access road, A1A, so that by the time I’m through walking, I’ve covered a little over 6 miles.

It was still daylight and each step I took was an acknowledgment of the deep sadness I felt knowing Aarón was leaving and each step was also a yes.  The breeze at the top of the bridge was quite strong, pushing against my body and I welcomed it.  At the south end of Fort Lauderdale Beach there is a basketball court and every time I’ve walked by it there’s a game going on.  By the time I was walking that stretch of my route, everything was bathed in the light of dusk and my eyes feasted on the color, the motion of beautiful young bodies stretching and jumping and running and turning.  I marveled to listen to several different languages and laughter.  At one point, I almost stopped. A young man and woman sat on a low wall that curves around the beachfront and spoke to each other in perfect Cali Spanish.  I know there are tens of thousands of Colombians in this area, a lot of Caleños.  But I am still always delighted to hear that accent when I don’t expect it.  And then there’s the bracing smell of the sea breeze coming off the water and the deep belly breaths I allowed myself to take watching a small sailboard skim the waves off the beach.  So much to take in.

There was yet one more way in which I realized I was saying yes.  After all these months of walking and paddle-boarding, I can move at a good clip.  I was aware that I had to find ways to get ahead of a lot of people, even after I had walked more than 5 miles, that I was moving more quickly than others.  I also was sort-of stunned to realize I’ve stopped playing a game I’d played for years.  For the longest time, especially when I was most overweight, I looked at other women’s legs searching for the most perfect pair of legs, trying to find the ones I would  trade my own legs for, if that were possible.  I realize that sounds really weird and in a sense it is.   It’s also a little pathetic—wishful, magical thinking in the highest degree.  Each time I made a comparison, I said no to my own self.  It was a form of dissociating myself from me, getting out of my body.

Sometime over these past few months, that has stopped being a necessity for me.  In fact, last night I loved my legs for their ability to heal, and hold me up, for how strong they’ve gotten, for the ways in which they, as part of my body, allow me to make myself available to everything that is involved in saying yes.  Life has come to visit, has settled in and found a place to be at home in me.

One thought on “Incarnation Revisited”