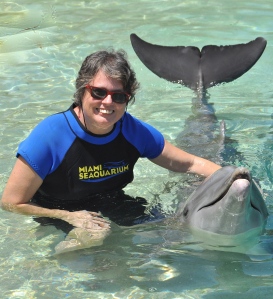 I woke up this morning to the voices of NPR playing on the radio on my husband’s side of the bed.  The pressure and drama and stress pushed each word of the broadcast and I wanted to care except all I felt was numb and sad in a very detached way.  What’s been unfolding in Boston is hideous.  But anything more I can say is basically a cliché or has been said far more beautifully and powerfully by someone else.

There was something else.  My baby girl was asleep in the room that used to be hers.  She has had amazing days at her new school.  Perfect behavior. Test scores the likes of which we haven’t seen maybe ever.  Not that I assume that it will last but that there is something truly worth celebrating in this spell of success.  So I picked her up from BARC late yesterday afternoon and she slept over.

Soon after I got up she came stumbling out, all spiky hair standing up and sleepy eyed.  She told me the smell of my coffee had woken her up and she wanted to have some.  Together we ground some more coffee beans and she watched and had a running commentary about the new brewing method I am using and what she’d like for breakfast.  The news continued to thread around us—and I wanted to feel guilty about cocooning myself and her from the darkness all around us but a true South Florida sun-shiney day was dawning and my girl was here. With us.  I held on to that joy quite fiercely.

After a slow start to the day, we went down for the treat I had planned for her—a ½ hour “Dolphin Encounter” at Miami Seaquarium.  Right at first, after we got there, my heart went to my mouth.  Luli continues to be at risk for elopement so she wears a lojack monitor on her ankle.  There was some serious concern that she would not be allowed into the dolphin pool because we can’t take it off.  I died small deaths of sadness for her and pushed pretty hard to find a solution.  One emerged: a wetsuit “bootie” that covered the lojack, making it safe for her and the dolphin.

The experience turned out to be more intimidating for her than I had anticipated.  Mothering from the edges, there are some things I’ve forgotten or don’t think through as thoroughly as I used to.  Nonetheless, we did it and by the end she was having a lot of fun.  When we finished, we stopped for a quick late lunch and then took her back to BARC because tonight she’s going out to a dance sponsored by the local park program that understands that young people like mine need that kind of fun too.  She was excited.  I was relieved because it made the transition easier, at least for her.  After dropping her off, I made myself not look back.  I can’t get used to this.  I have to savor today in its ‘enough-ness’’—no, in its completeness.

The news is still looping the same videos, the folks in Boston are still in the midst of an awful situation. I am still trying to keep the grief of so many at bay;  I haven’t even allowed myself to think about the children who are in the orthopedic unit at Children’s–my old stomping grounds.   That young man, and my God, he is so young, only two years older than my girl, must be so scared.  He has done something monstrous.  But I ache for him. And I ache for his mama.

One thought on “Encounter”