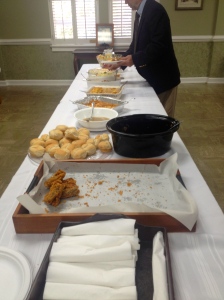 We gathered in the parking lot of First Baptist at 11:15. Not quite fall, but no longer summer, the sun did not make the day warm. One of Sherod’s nieces, a retired Army lieutenant colonol we call Commander Kim, herded us along, Sherod and his sister engaged in another small round of good natured sibling squabbling about where the cars were supposed to be parked.  There were tall, beautiful cousins, one fighting a panic attack, one or two somewhat pouty lips, and folks who awkwardly acknowledged that we are are related to each other, though most days that has no reality whatsover. Uncle Ralph, Juanita’s last surviving sibling, made sure we knew what would be going on and what we were supposed to do.  None of us really listened, though I think everyone got it that this was one of those times we shouldn’t forget. The whole family bunched together on the stairs in front of the Ed Building for what may be the last, most complete family picture of the Mallow-Derryberry’s.

When everyone had finally made sure they had a snapshot in their smartphone, Uncle Ralph shepherded us up the stairs to the dining room where the ladies of First Baptist had spread a Southern feast for us: sweet tea, fried chicken, green beans, squash casserole, potato salad, lima beans, corn casserole, Jello-O Salad with cool whip and mini-marshmallows, fruit salad, rolls, refrigerator pie and chocolate cake.

Visitation happened inside the sanctuary, where Tiffany windows filtered the fall sunlight, dimmed and colored and hushed it as we all considered that under that pall lay Annaw, the last true matriarch of the family.  A dear friend from Fort Lauderdale was there all of a sudden, giving Sherod and me a hug, disorienting and consoling us all at once.  There was an almost steady stream of people who wanted to pay their respects and there were the unctuous funeral directors who kept everything moving smoothly.  I’d never been to a Baptist funeral–more simple than our Episcopal version and just beautiful.  Uncle Ralph gave the Eulogy, Pastor Light the sermon.  A musical performance by a nephew, an opening and closing hymn and then it was over.

Juanita was 13 when the Great Depression hit. Her younger brother Ralph told stories about her.  Their family barely eked out an existence in the worst years of the Depression.  Juanita graduated highschool, attended a business college and then got her first job.  She was paid $10.00 a week as long as the company was able to stay open. When they finally closed, her last ‘paycheck’ was a rusty old typewriter that my sister-in-law still has.  But her very first paycheck she used to put a down payment on a bicycle for her baby brother Ralph. That’s the first story.

By the time Ralph turned twelve, Juanita was working at the movie theater in town, selling tickets.  Children under 12 paid a dime for a ticket.  Ralph was a small 12-year old on the day of his birthday and had thought he could pull off a few more 10 cent tickets.  Except it was Juanita selling them so when it came his turn, she reminded him his ticket now cost 15 cents. He panicked because he didn’t have the extra five cents and he really wanted to see the movie.  Juanita dug in her purse to give him a nickel.  From then on, whenever he went to the movies, there would always be a nickel on the counter for Ralph to buy his ticket.  This one’s the second.

There were all kinds of folks who came through the receiving line to extend their condolences.  Most shook our hands or hugged our necks quickly and moved on.  One stopped when he got to me. He wore a suit and tie, just a regular looking guy.  He told me he had been Juanita’s mailman for decades.  Now, my mother-in-law had lived in the assisted living facility for at least the last 7 years.  Yet the mailman remembered her, how polite she always was to him, how on the really hot days, she had a glass of ice-cold co’cola waiting for him.  He teared up as he told me what a fine lady she had been. This one’s the third.

When Sherod and I first married, Juanita and I had a hard time of it with each other.  In fact, I always felt like an interloper, even at this funeral, aware that Juanita’s joy would have been far more complete if Sherod’s first wife had been there instead of me.  But we found our way with each other and these last stories about her, the courage and dignity with which she accepted the realities of aging, the meticulous care she took to be responsible for her own self and for her family reminded me that steadfast, unglamourous, every day love is hard and stunningly beautiful.  My diminutive, sometimes cranky,mother-in-law was heroic.  Even in death she was heroic, ensuring there was a lovely funeral left paid, planned and programmed for as a celebration of her life and her love that drew the family together, if only for one last time.

One thought on “A Feast & Three Stories”