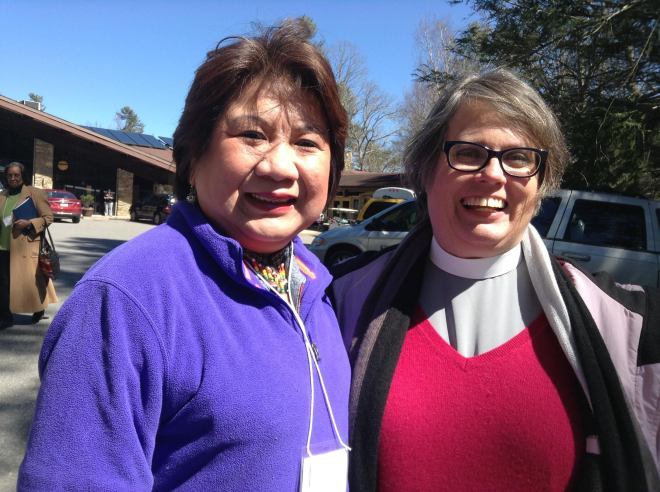 With My Friend, Ruth Casipit Paguio

The conference is winding down. Tonight there has been all kinds of fun with a talent show featuring the four ethnic ministries in attendance.  I had been sitting with my two ECF buddies when it was time for the Latino community to do our foolishness.  It was not anything I thought about–I was just there, with old friends and some new ones as well, but clearly, unequivocally, in my mind, a part of the Latino community.

But a strange thing happened today at breakfast.  Apparently, someone decided a picture was needed of the ‘Euro-american Allies” of the Ethnic Ministries Office attending the conference.  The photographer came by my table and started insisting that I come out too and get my picture taken.  I kept insisting to her that I was a latina.  This pinged back and forth between us about 3 or 4 times before she finally gave up but she was obviously irritated and so was I.  With the benefit of hindsight, I think I understand a little better why she had been so insistent–I am here not representing El Centro Hispano de Todos los Santos, or even as priest missioner of the New River Regional Ministry, but rather working with ECF.

Later in the day, I was walking by a group of Latino guys I hadn’t really spent any time talking to; they started whistling and saying, “Allí va la güerita que dice que es latina y que no se quiso tomar la foto con los europeos” (there goes the little blonde who says she’s latina and didn’t want to have her picture taken with the Europeans)–not in an ugly way, but actually with a mixture of confusion and admiration.  I didn’t even go for a full throttle generic Colombian accent–I pulled from every fiber of my Caleña being and answered them in Spanish–“Qué güerita ni que pan caliente–caleña”.  (Like heck I’m güerita–I’m from Cali).  That broke the ice and we went on to talk and giggle a bit before we went our separate ways but that has stayed with me all day.  I have gone to work with ECF precisely as a woman with the experience of serving in the church with and as a latina, and in fact, I think that’s part of the strength I bring to the job.  It was also incredibly important for me to have the freedom to identify myself and not have it done for me.

Even so, I am mindful that identity is so fluid for me–just like the question about being in the center or being on the edges confounds me, whose I am can get confusing too.  When I am in Sweden, I feel so very Swedish.  When I get to come to events like this, when I am celebrating the Eucharist saying the words from the Eucharistic Prayer of the Immigrant in Spanish, I am latina both in an existential and ontological way (I know, big words, but they really get at something important to me).  And all those years, when I lived with Sherod in the deep south and hardly ever even had occasion to speak in Spanish except to my family by phone, I was about as American as the person next to me.  Maybe the best way to understand myself is to say I live in the in-between places where those neat lines of demarcation simply don’t make anything clearer or more lovely or more true.

One thought on “Whose I Am”