I had done my weekly grocery shopping in Prattville and was driving home to Lowndesboro listening to public radio. I was more than a little amused because I was listening to really great classical music—something I never got to do in SoFla that had public radio that only broadcast talk shows. Here I was, driving alongside cotton fields listening to very sophisticated music. The show I was listening to was Performance Today that included a feature about a classical pianist who had performed at a trendy new club in New York called SubCulture. I tucked that name away and kept heading home at my slow, country pace.

I’m in New York for 3 days of pretty intense work and there’s something different about me. I sleep so well and am so much more rested than I’ve been since I began working for ECF that I got here with a bunch of energy.  AT the end of my work day, after having left my house at 4:20 AM to catch my flight into JFK, I was ready to party a bit. So in the Rosa version of it, I went clubbing in New York.

I jumped on the subway at Grand Central Station and went downtown to the Bleeker Street station; one of the station’s exits is literally at the doorstep of SubCulture. 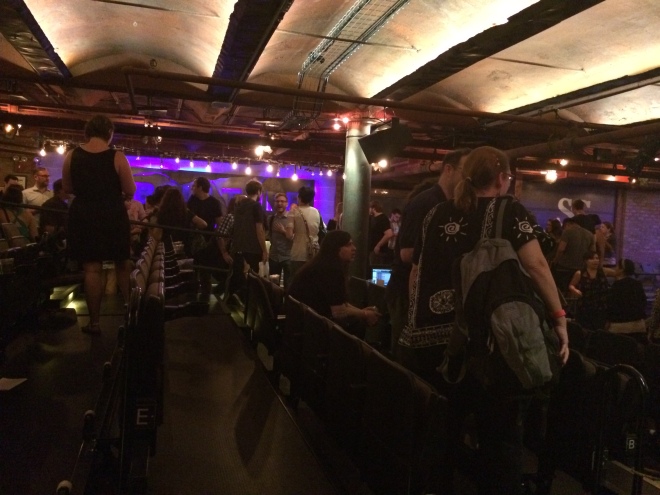 Tonight, an indie group from Brooklyn,The Scarlet K was debuting so I sat in this incredibly intimate performance space, sipping on a cocktail that included proseco, homemade cucumber water and mint, and heard a marvelous, talented group get out there and just do it. Sarah Knight, the lead, was winsome, deep and joyful. She has southern roots and at one point, had the audience join her to sing Blessed Be The Ties That Bind in 4 parts a capella. Made the hair on your arms stand up kind beautiful.  The subway was packed, packed even at 10:00 PM, Grand Central Station teeming with people.  The contrast is stunning.  I love both parts of my life.

Off to bed with an intense 2 more days of work ahead.

One thought on “Clubbing in New York”