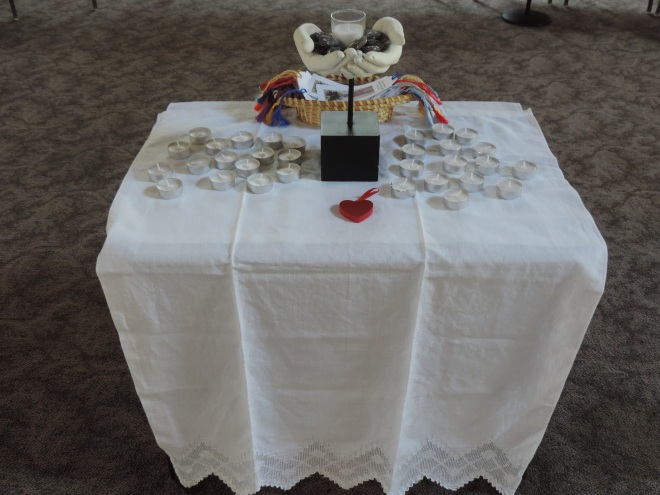 Preparing for yesterday’s Pastoral Care Retreat , Church of the Ascension

A few weeks ago, as I was wrapping up my work with ECF, I found out that I was under very serious consideration to become interim, part-time priest-in-charge at a parish in a reasonable driving distance from the farm. The Episcopal Church has a very structured, well-defined calling process that does not quite fit with a priest like me picking up and moving from one diocese to another. When Sherod and I bought this farm and moved here, I understood that I was probably going to have to put together a patchwork of ministries for myself. I had expected that my position at ECF would be the ‘core’ of my vocation for the foreseeable future. This possibility afforded me some relief; it was good news that, along with serving at St. Paul’s, Lowndesboro, I might also be able to work with another congregation.

To tell next part of the story, I need to do a quick rewind to the Spring: in April, at about the same time as I decided to move on from my work with Vital Teams and ECF, the rector of Church of the Ascension called to ask for some help for the summer. We met and agreed that I would take on a temporary assignment with him, working about 4-6 hours a week to provide liturgical and pastoral coverage, especially while he took time off during the summer. Though we set a definite start date, we left the back end of the assignment a little vague. After being contacted by the diocese about the interim position, and faced with the strong possibility of adding another part-time position, I needed to plan an ‘end game’ with Andrew.

I sent him a brief email and asked to meet with him after returned from a trip he was scheduled to take. Less than an hour after I sent the note, he responded and asked me to meet with him. The conversation was lively and just knocked the socks off me. I left with an offer for a permanent position at CotA. We began by talking about a ¾ time job but in the end, we agreed that I would come on board full time. Today at both services at the Ascension, Andrew announced my appointment as the new Associate Rector.

This means so many things. Sherod will more than likely take over Sunday duties at St. Paul’s and I will be the clergy-person’s spouse—available in a pinch, but no longer priest-in-charge. I am saddened and also glad that I live in Lowndesboro; there will still be ways to stay engaged in a community that is, quite simply, home. There is a budding Latino ministry at the Ascension, launched by a very capable and committed person who is a postulant for holy orders. My work will be to support her and the programs she has already launched; I am thrilled to get to help. All summer, I have been engaged in Pastoral Care ministries—not only doing a lot of visiting, but discovering some opportunities to open more spaces for the lay leadership teams that have thriving ministries to stretch and start dreaming for themselves and the congregation. Finally, I am glad I will also help the leadership team continue to explore and try new ways to serve a younger segment of the population in Montgomery.

I am beyond thrilled. More than once in the past year, I found myself grieving deeply for the kind of ministry I thought I would not get to do again. The people of St Paul’s have tended to each other and their community with style and grace for years and years; you don’t come into something like they have and stir things up without unleashing all kinds of “unintended consequences”. My work was, first and foremost, to stay out of their way.  Not being a rector or priest-in-charge is more true and real to the many pieces of life I juggle. I have come to the conclusion that I work out of an economy of ‘spiritual energy’—the joys and heart break of mothering Maria continue to require a lot from me and I can easily find myself depleted of joy, hope, charity and laughter. With a retired spouse who’s pushing awfully close to 70, I am thankful not to carry the burdens or responsibility that go with being a rector or priest-in-charge. There’s my aging dad in Panamá, my roses and my sweet chickens. They will need my continued attention and they are also my grounding and my sanity.

I also feel some pride and some extra responsibility because I am the first woman clergy to serve in this parish.  Today, an elderly woman who was raised here came up to me in tears and told me how she had prayed since she was a young girl for there to be a woman clergy person; we’ve all of us got things to learn. What makes my heart just sing this afternoon is that I get to be directly involved in ‘boots on the ground ministry’–where for me at least, there are so many thin places between the ordinariness of life and the Kingdom of God and I am so privileged to live and move and have my being precisely in that space.

So here I am, a new Associate Rector.  And just like that, it all changes.

“There is, it seems to us,
At best, only a limited value
In the knowledge derived from experience.
The knowledge imposes a pattern, and falsifies,
For the pattern is new in every moment
And every moment is a new and shocking
Valuation of all we have been…
The only wisdom we can hope to acquire
Is the wisdom of humility: humility is endless.”