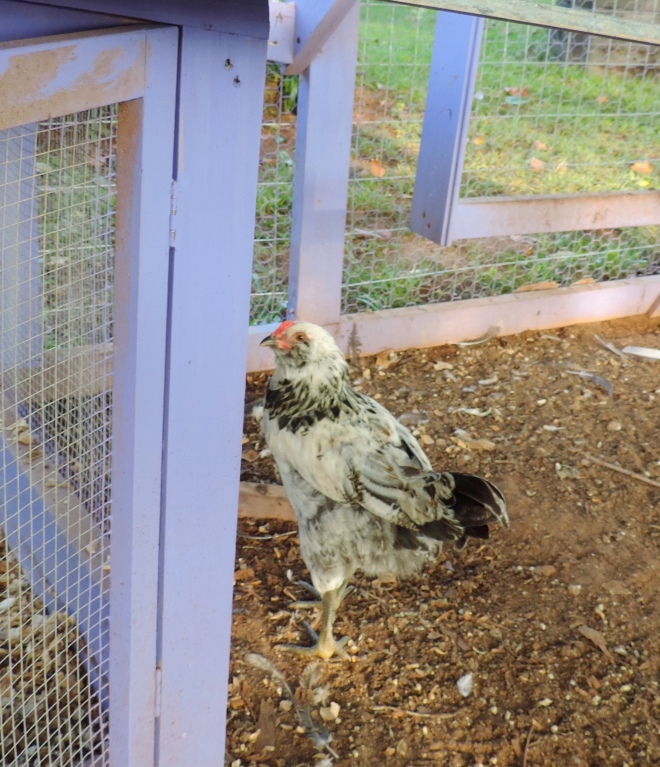 I had a bout of insomnia last night and then managed to fall asleep at about 4:30 this morning.  A while ago, I tentatively opened an eye and there was the Mallowman, standing by the bed, smirking.  “We’ve got trouble in chicken land,” he said.  “I was up at six, made my coffee and sat out on the back porch as first light broke through.  That’s when I heard it.  A rooster crowing.  And then he crowed again–a rather juvenile-sounding rooster, but nonetheless, a rooster.  I looked over to Fort Yolk, Home of the Mother Cluckers  [I know, my spouse is too clever by half].  That big old meanie we’ve been worried about because she was always pushing the other girls around?  She’s a ROOSTER”.  I responded with one word that I cannot print here and got up in desperate need of a bracing cup of coffee.

Almost as soon as we got the chicks in June, I noticed this one was bigger.  I wondered if it might have been born a few days before the others.  Then we both saw how she seemed more aggressive than anybody else.  Last week, we noticed one of her tail-feathers beginning to curve in a most rooster-ly fashion.  But we have seen no sign of spurs and everyone says a rooster has spurs.  My friend Pat, the chicken whisperer, and her husband Larry, came over, observed, and opined.  We concluded it was just a mighty big hen.  And we were all wrong.

Now, the question is, what the heck am I going to do with a rooster?  I asked Sherod if it was possible to neuter him.  He laughed.  We’re considering taking him to the Autauga Chicken Auction and just giving him away.  If any Lowndes or Montgomery County peep would like a beautiful Americana rooster–I’ll deliver.  If anyone further away has always wanted one, I might make the drive too.  Sherod’s idea is to let him be fully free-range when he is big enough to put the fear of God in other creatures. The problem with that plan is, a) I could not live with myself if something like a fox or a coyote got him, and b) I want to be able to let the girls out to range around for at least a couple of hours a day without fear of getting assaulted.  I am wide open to any other suggestion someone might have.  But the bottom line is this: boys are nothing but trouble, at least in the chicken coop, and I want my pretty chicken girls to have a placid country convent life.