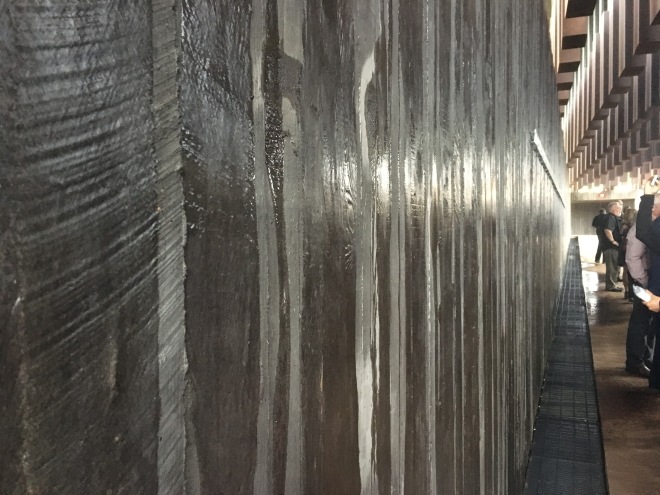 Memorial for Justice and Peace

The invitation was unexpected and deeply appreciated.  Early on the morning of the 26th, EJI held a service of dedication for the National Memorial for Peace and Justice. We began to gather at about 7 for a service that would begin at 7:30. I ran into fellow Episcopal and Methodist clergy from Montgomery and saw Episcopal clergy of considerable national renown.  And then, a few minutes before we were allowed to enter the Memorial, a soft stir went through those who’d gathered and there was Jesse Jackson. Old. Feeble. Moving very stiffly, walking towards and then past us. Still an imposing figure.  Many find it easy to dismiss his voice, his work on behalf of civil rights.  I can’t do that. Yes, I see the flaws and the messiness of his humanity, but then that’s true for all of us, isn’t it? Waiting to go into the Memorial, those of us who knew each other spoke about Jackson and especially, remembered his speech in 1984. I heard respect for Jackson, and I found that a reason for joy.

The Memorial itself becomes more and more haunting as you find your way through it.   I was almost overwhelmed as I got close to the last part of the exhibit, when weathered steel column after weathered steel column hung overhead.  So many and so close they feel like they press down on us, crush us with the burden of such violence.  So far up though, that it would be easy to think, “there’s no way I can take down the person or people who hung like that column, hold their broken bodies against mine.  What’s done is done.”

There’s a wall fountain that runs the length of that last side of the Memorial, humming that lovely, lilting song that water sings as it runs down and away.   Against that joyful sound of  water, the silence of those columns made of steel, made of the gossamer of memory, the utter silence, hung overhead and cried louder than the keening of all those who mourned the men, the women—children—who died by lynching in our country.  Time and water both carry so much away—our memories, the ugliness we don’t want to see, the blood that has been shed. Enchanted by beauty, like the beauty of that wall of water, it is so easy to forget to see, or hear, or engage what we get wrong as a nation; distracted, we don’t realize how, too easily, justice and mercy get left by the wayside. It was an act of will for me not to let the water lull me or carry me away from what I had accepted to remember by attending this service of dedication.

In the next couple of days, as has become my practice, I went for afternoon walks that kept me next to a small stream that runs parallel to Old Selma Road, that kept me where I could still hear that lilting song. My thoughts kept returning to that wall of water, and what part it might have had to play in the most intensely painful, sobering section of the Memorial.  It occurred to me that it was also a veil of tears, a re-gathering of all the tears that have been shed because of racially-motivated terrorism.  And it was a reminder of the hope that we are capable of being washed clean, as we are washed clean in the waters of baptism.

During the service of dedication, after an opening prayer and introduction by Bryan Stevenson, founder of EJI, the group Sweet Honey in the Rock began to sing and from then until the end of the service, I found my own self in tears. What most struck me was the gratitude that was lifted as prayer in the music that was performed and the reflections and comments that were offered.  There wasn’t demonizing or shaming or denunciations in what I heard. What I did hear was an urgent need for all of us to understand that the threads of fear and hate that weave through the part of America’s story that made lynching acceptable, still weave their way through our story today, and still have the power to  “choke the life out of our democracy.”

The reading for the fifth Sunday in Easter in the Revised Common Lectionary comes from Gospel of John; it is the last of the great I AM statements: Jesus said, “I am the true vine and you are the branches” its message is all about abiding with, and loving one another as the way to bear rich fruit.

People I love deeply in the community I live in have questioned the need, the value of a memorial such as the Memorial for Peace and Justice, have been deeply offended by it.  I struggle to understand that position and I pray for ways to have conversations that will help me understand and will allow us to abide with each other in less silence, less careful walking around things that make our relationships feel brittle and fragile.  For now, what I can see clearly is that part of my love for this country, this state, this little corner of God’s creation consists in remembering, remembering so as to be inspired to work against everything that resides in all humanity and is capable of taking the easy path of lynching, and hating, and destroying, and killing the other on behalf of our own comfort and safety.