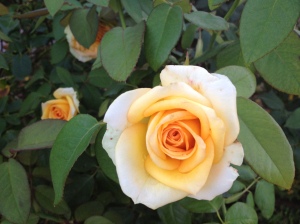 I write this as we are hurtling through thin air at 30,000 feet above sea level, running south to north over the Atlantic along the eastern seaboard.  I have miles and miles of visibility from my window on this clear summer day.  After a brief layover at JFK, the course will be west to east and it will take a little over 8 hours to get to Stockholm.

I had a wonderful send-off last night and this morning:  the spouseman and I prepared a grown up meal together with no running complaints or whining from a cranky teenager.  There is something to be said for being empty nesters!  A  few times during the evening I was reminded of what it was like when Maria wasn’t with us and Friday nights were  fun and lively for us.  I took a good long walk; while I was out, watching the lightening crackle over the western part of the county, the phone rang and my girl was on the other end.

Earlier in the week we’d a bad time of it. First she wanted to see us, then she didn’t and didn’t even want to talk to us by phone.  I bet it’s going to be a few steps forward a few steps back like that for quite a while.  But last night she said,  “I’ve been looking at the picture with you and daddy and me and it keeps telling me to call.  I’ve been missing you.”  We agreed that we’d have breakfast together so we picked her up bright and early this morning;  after gentle, sweet time together, we gave each other a family hug and then I was curbside, checking in for my trip to Sweden.  We get to try again.  Again. We will try lots and lots more times, and I get overwhelmed by such grace.

I have been given the freedom to look to the days ahead now.  It’s going to be another of those “dips in time” for me.  My grandparents on my dad’s side emigrated from Sweden to Colombia in the late 20’s.  There are very big gaps in my knowledge of that side of the family, except that I know that when my dad was 9, his father insisted that my dad should return to Sweden to be educated there.  My grandmother, the person I am named after, begged her husband not to make my dad go.  She was a surgical nurse and she knew that she was dying of pernicious anemia, that if my dad left she would never see him again.  My grandfather was unrelenting.  Then, while my dad was still in Sweden, in high school, World War II broke out and he did not get to come back home until he was 26 years old, long after my grandmother had died.

I always knew I carried her name.  There was also a beautiful oil painting of her that hung in my parents’ house.  Rosa was six feet tall and regal, sitting in an exquisite, 20s’s era lace dress.  As a little girl, I hoped I’d get to be as tall and beautiful as she and had to settle for me instead.  But nobody had stories about her, I had no real sense of who she was.  Conversely, I knew my other grandmother, Vera (whom I’m also named after—uggh!) only too well and she was quite horrible and became more horrible as she aged.  I’ve probably written elsewhere that the worst thing my mom could say to any of her children was that we were becoming “Just like Abuelita Vera”; that particular criticism struck terror in my heart.

Many years ago, I promised myself that one day I’d go back to Sweden and try to do as much research as I could about Rosa Hellberg and her family.  My dad and I talked about this hope when he spent time with my family at Christmas and we started planning our trip. It was a good opportunity to tell him that I wondered if finding out more about her would help me find out some things about my own self.  Even as my love and appreciation for my mom have grown, I have also continued to live in fear of “becoming my mother and my grandmother” with their wide streak of destructiveness.  In turn, this led my father to tell me the first story I have ever heard about his mom.

One day, several months after my dad moved back to Cali in the early 50’s, he hopped in a cab that he’d hailed from the sidewalk.  When my dad got in the driver stopped the car, turned around and stared at him and said to him, “Usted tiene que ser hijo de Doña Rosa” which means, “You must be Miss Rosa’s son”.  The cab driver had driven my grandmother around town frequently while she was still alive and remembered her well.  He told my dad that he wasn’t the only one who remembered her, that she was beloved by many for her kindness and the way she cared for people.  The cab driver said a lot of people called her “la angel” (the angel).  And then my daddy made me cry because he said that as he’d gotten to watch me work at the church, he’d thought that this was what his mom must have been like.  God knows, I am no angel.  But it was sheer and absolute gift to be told that story.

We have my grandmother’s birth date, and a general idea of the part of Stockholm she grew up in.  We also know the hospital where she did her training and that record keeping in Sweden is excellent.  So, God willing, I will come back home after I get a few more glimpses of the woman whose name I am proud to carry.

One thought on “Abuelita Rosa”