We got to Lowndesboro about an hour before we were supposed to meet the realtor and general contractor.  That gave us time to drive around and get a feel for the neighborhood–the old, lovely churches, four of them, that were started sometime around the 1840’s.  Today, their congregations are so small that there’s a single congregation and four pastors.  The first Sunday of the month, everyone worships at the Episcopal Church, the second with the Methodists, the third with the Presbyterians, the fourth, with the Baptists. There’s a big farm with rolling hills and lots of sheep.  Lots of old houses and any number of ranch-style, newer ones in what can only loosely be described as a township–mainly farmland.

Towards the river, the pavement gives way to roads of Alabama red dirt.  One of the things that fascinates me about this particular part of the country is how you see the ghosts all around if you look closely.  As we bounced along the road behind the small farm we are looking at, this is what we came upon: 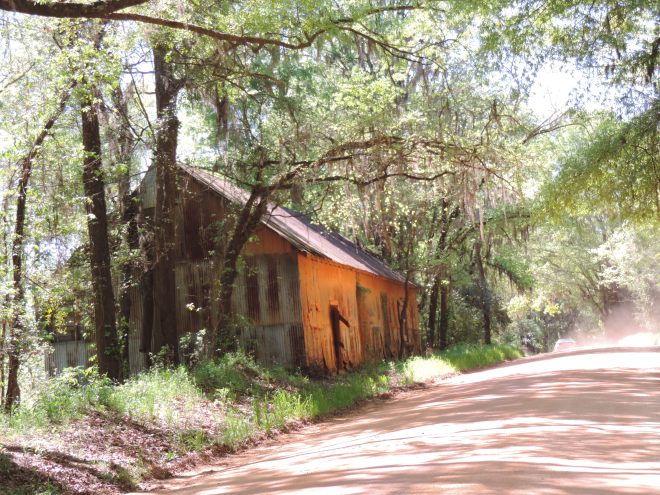 A cluster of buildings long since abandoned, going gracefully down to the dust.

After several hours poking and prodding and going through everything with a fine-toothed comb yesterday afternoon, this morning we made an offer on the very small farmstead we’d been looking at. Four acres, a house, a shop, a shed for hay, and an open barn where Sherod can hold revivals.  What appealed more to him is a second-floor balcony and the thought of sitting up there in his underwear, shooting when the fancy hits–one of those eccentric neighbors everyone says you’d better watch out for.

Headed to Ocala on the first leg of the trip back home this afternoon, had me look up how to buy a donkey and some goats on my iPad. After I had given him all the facts (a donkey costs about $400.00), I found my old friends at the Antique Rose Emporium–there are two trellises one out front, one in the back and just like that, I could be back growing the antique rose species I love so much.