Day before yesterday, I got up early and went out to the garden. I had promised L’s mother I would bring her flowers for the house because that evening she would have people coming to visit with her and pay their respects after the death of her son.  I was able to take her quite a lot of different flowers and the colors were beautiful.  It was a fleeting gift–I imagine already lots, if not most, of the flowers have wilted and faded.  It was a drop in an infinity of loss.  And I also was so grateful I could do that little bit to celebrate L’s life.

Yesterday, along with assisting with L’s funeral, I was the celebrant at our regular Wednesday evening Eucharist that was turned into a particularly beautiful and holy moment when the Rector Emeritus of Ascension, his wife, and their children joined our small evening community to celebrate the couple’s 66th anniversary.  One of their sons was a year behind me in seminary and is now a bishop.  Another son is a new friend and peer in the work of ministry in the River Region. Another, a daughter, is an extraordinarily talented fiber artist. Every single member of the family is accomplished and it is something when a family becomes the choir that sings the Gloria, and then, the offertory as I set the Table. They sang Abide In Me, a cappella, with glorious harmonies.  Goose bumps lovely.

All that was pretty spectacular.  But it was what happened during the Prayers of the People that had several of us speechless.  First, an explanation. Our former rector has been slipping into the knots and tangles of age-related cognitive impairment and recently has taken another downward turn so even communicating has become much harder.

I had asked one of the members of the parish who regularly attends our evening service to lead us in the Prayers of the People, but as she started the first petition, this person who has lost so much of himself, began to read the petition with her, as we all looked on in wonder.  Then it was his voice alone, sometimes a bit hesitant, but for almost all the prayer, strong and sure, that carried us through our petitions.  Sunday after Sunday, year after year–for decades–this priest had said words that became a part of the very core of him, of a part that nothing has been able to steal away.  That may change.  In the end, it all slips away from all of us doesn’t it?  But how glorious to see how all those prayers we say stay with us, carry us through, even as the sun sets.

It continues to be an extremely busy week with unexpected challenges and I will work tomorrow and Saturday, as well as extra hours on Sunday.  I wore my fancy shoes all day yesterday and early this morning I woke up with an awful cramp down the back of my leg, a reminder of my own “no longer a spring chicken-ness”.  That is why I try to make sure I continue to find small infinities to gladden my heart.  These were the small infinities of beauty that lit up my morning before I headed out to work.  We find God in all things… 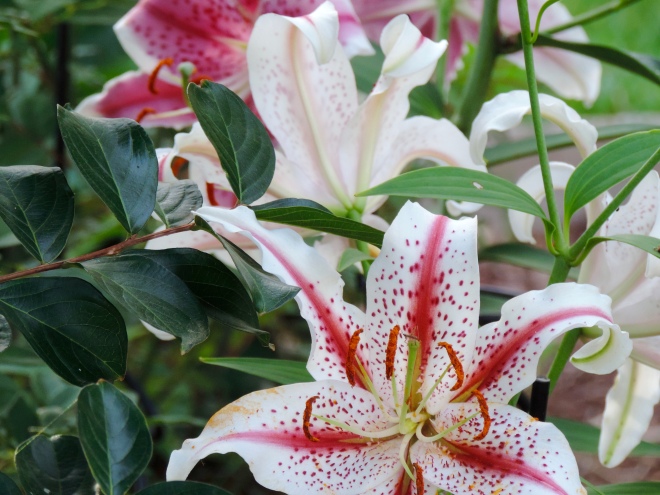 Stargazer Lilies Blooming in My Garden

The Blueberry Harvest is Beginning

9 thoughts on “God in all things”