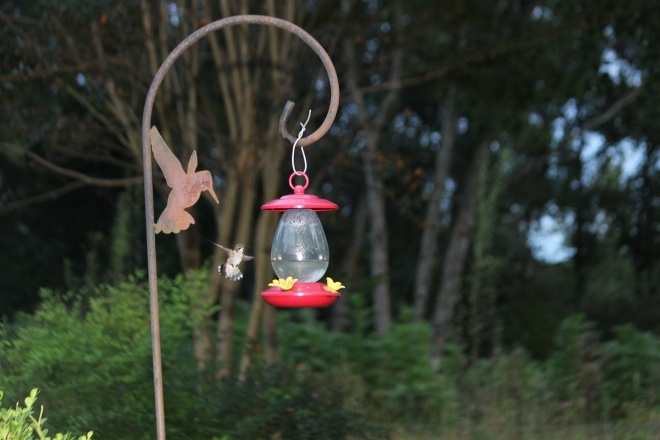 At some point, when most days have been warm in the weeks between April and May, Sherod takes down the bird feeders that hung all winter in front of our deck. Then, he makes simple syrup, carefully washes out the hummingbird feeders and puts them out instead.

This year, he and I were out on the deck, visiting in the early evening, when the first hummingbird, back from its migration south, hovered for a bit and then settled to help himself to something to drink. We’ve had lots of visitors to the feeders all summer long and about now, especially in the evenings, the two feeders are crowded with birds dive-bombing each other, jostling and pushing each other away to get another chance to eat. It won’t be too much longer before another season of migration begins and there’s that sense of urgency building, as birds do all they can to prepare themselves to withstand the long journey ahead.

I sat on our deck with my camera, watching, waiting to get a good shot, listening the buzz of their wings in the air, noticing how the lightning bugs were slowly floating out of their burrows in the grass, thankful that summer is not yet all the way over. But everyone’s back in school, and the truth is, there’s little left of the season of sunshine and growth. Usually, I would have felt the quickening of excitement at a new season approaching, how the winds from the north will begin to blow before too long, and how fall will come behind.

On this day, as Harvey has been pouring its misery on Texas, as I think of my transgender friends after that vicious and unnecessary ban that’s been reimposed, as I think of the men and women I have served through my work in Latino ministries, especially in Fort Lauderdale, and the pardon of Joe Arpaio, I have this weird sense of far deeper, more desolating, endings and beginnings as well.

It is not my intention to play Chicken Little and run screaming, “the Sky is Falling, the Sky is falling.” Neither can I say this is comparable to the situation Irène Némirovsky describes in her remarkable book, Suite Française, a novel about members of the Jewish community as they to flee from Paris when it is about to fall to the Germans.

I read Suite Française many years ago and still remember my heart racing in one section in particular. A woman of considerable privilege, is standing next to her car, finishing up the family’s preparations to drive away from Paris. She is worried about trying to get all her Porthault linens and the silver into the trunk, unwilling to part with any of it, so she makes her household staff load and unload the trunk this way and that, losing precious minutes to flee, while all the while, with impeccable precision and order, the Nazi death machine marches towards Paris. Perhaps because fine linens and silver were greatly valued in my mother’s family, and I have inherited so much that is beautiful and fine in a traditional sense, I found myself getting more and more frantic as I read on. “Flee, flee, flee,” I kept wanting to implore her, “None of that matters. The world, as you have known and loved it, is giving out under you and all that stuff is worth nothing.”

It is not so much that I am afraid (though sometimes I do feel afraid), as I am aware of how easily we pay attention to precisely the opposite of what matters. That poem by Martin Niemöller, “First they came for the Socialists…” has made the rounds on Facebook to the point that it is easily dismissed as trite by now. But Martin Niemöller, a Lutheran pastor, spent 7 years in a German concentration camp and spoke a truth that cuts to the quick if we let it.

After hearing about Joe Arpaio’s pardon, I made myself read the DOJ investigative report on the Sheriff’s Office of Maricopa County when he was Sheriff and then, other pieces about him. I read how he jokingly talked about his “concentration camp” –the “prison tent city” where, between 1996 and 2015, there was no explanation given for how 73 people died. I had been reading about him on and off for years now, nauseated by his sheer cruelty and at the same time, always mindful of the need to speak carefully and gently as a priest of the church, so as not to offend. I am infinitely capable of finding distractions that allow me to look the other way.

I can’t any longer. Arpaio was found guilty of felonies that directly undermined our constitution. By pardoning him, Trump has once again thrown his lot in with advocates of a kind of racial supremacy that can only become more hateful and destructive with each nod from him. He has gone another step in subverting the rule of law in this country.

The sky is not falling. For most of us, today, tomorrow, and the next will be pretty ordinary. The Nazi’s aren’t marching into town either. It’s just that in too many ways, I see true evil and darkness gaining a foothold in the country I so love. I will give witness against the harm I see being done. I will resist my temptation to be comfortable at the expense of others’ pain. And I pray for God’s strengthening grace to persevere as I find ways to be part of an alternative to all the hate, the despair and desolation taking hold.

2 thoughts on “Of hummingbirds, Chicken Little and “Suite Française””