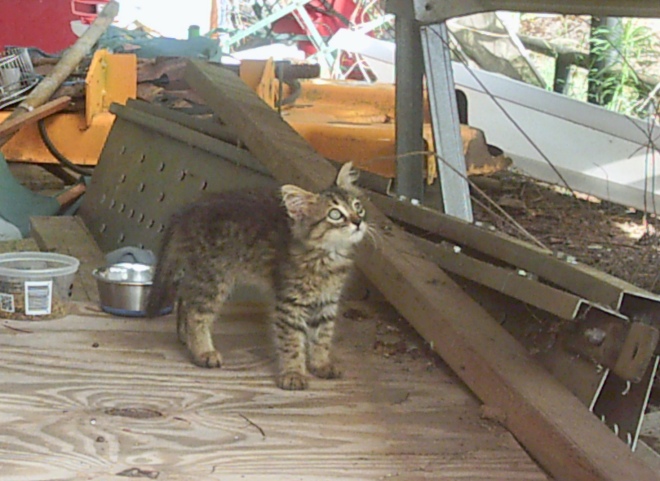 About 10 days ago, a little feral kitten took up residence in our pole barn. S/He’d come staggering into our property earlier in the morning and when I figured out s/he had found a hidey-hole in the barn, I put out some food and water. The kitten was so skittish that there wasn’t any way to get close, though it became clear almost immediately that the food was getting consumed and the kitten was staying put. I was fearful for what our two cats, Gilbert and Sunny, might do in response to this interloper of their homestead, when it became clear that lil’bit was going to stay around for the food.

Yesterday, when I put dinner out in the little dish in the barn, Gilbert, our boy cat (who is all boy, and can play pretty rough) came bounding up and tried to start eating the food until I shooed him away. I went on with some other things I was doing in the yard until I happened to look back in the direction of the place in the barn where I most often catch a glimpse of the little kitty.  Gilbert sprawled out on the cool dirt in the barn as the kitten approached him. I knew better than to try to run, scoop up the kitten and I knew with dread that I was about to watch a massacre take place. What I wondered was how quickly Gilbert would kill the kitten. 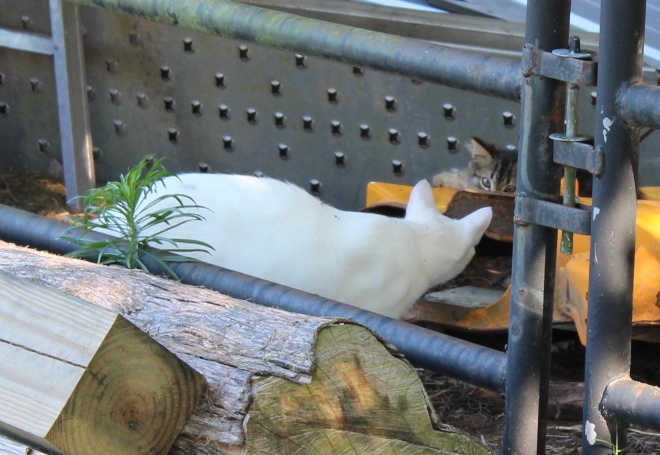 That’s not what happened. I had caught them playing what we call “whoobass”  in my family. Gilbert was as sweet and gentle as I’ve ever seen him be. That small fluffy baby cat was deliciously playful and only stopped teasing with Gilbert long enough to look at me with mild curiosity, not fear. Today I started back to work after a glorious week-long stay-cation, and before I left, I took some more food out to our new baby. The two were back playing with each other.

What is the kingdom of God like? The kingdom of God is like Prince Gilbert of the homestead who had good reason to protect his territory and drive out the stranger, and who instead welcomed one who is vulnerable and scared and alone and said, “you are my friend.”

4 thoughts on “A small parable of joy”